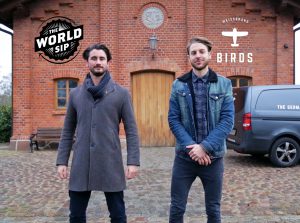 For our first full episode we wanted to make a statement about what we stand for by visiting an area not massively known for its drinks production, and featuring not just a new product, but a totally new spirits category started by young, risk taking, entrepreneurs with a passion for what they do… lets just say that struck a chord with us for some reason…

The thing I love about Birds is that everything about the product reflects its creators. Those being four friends, the brothers; Julian and Luka, and their long term friends Lupo and Basti (Basti was too busy to feature in the episode… apparently someone has to actually be out there selling and not messing about with us in a distillery! 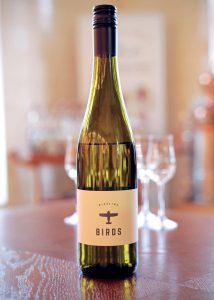 The base of Birds is the exceptional Reisling wine from the Moselle in Germany. This traditional German product echoes their German heritage, and their pride in a fantastic liquid that their country has been producing since the 1500’s. However their young, curious minds knew that there was something more that could be done with this. Through distilling the wine, they produced a clear base spirit between a classic brandy and fruit spirit.

Still not content with settling there, another of their shared passions begins to clearly shine through in the product, as their love of travel and exploration found them combining knowledge picked up from adventures around the globe, as they all research and suggested potential ingredients spanning the five major continents. After much debate and testing they settled on the following ingredients, each bringing its own talents to the Birds party. 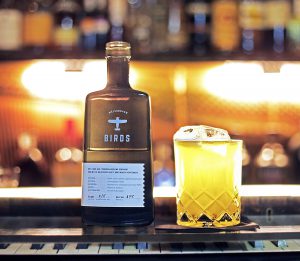 Europe;
– Orange (…you know what orange tastes like)
– Apple (…again… apple)
– Black current (… use your imagination)

Much like gin these ingredients are botanicals, and they are steeped in the still with the distilled Riesling wine. As alcohol is such an effective extractor of flavour (think home made skittle/chilli vodka) the oils from all of these botanicals are taken on by the distilled wine and like instruments in and orchestra, they work with one another to produce the balanced final product.

Nose: Complex – initial eucalyptus, fresh and menthol, then deeper more intriguing notes come through, like the cacao and spice.

Taste: My gin soaked palate immediately searched for juniper, but you quickly realise its absence and that is a great thing. This is not a gin, it doesn’t claim to be a gin, it is a botanically infused white brandy, and allowing the botanicals to roll over your tongue is a sensation. The notes on the nose are delivered with each sip and the fresh eucalyptus is partnered with fresh herbal spices, all under pinned by the cacao and red berry flavours.