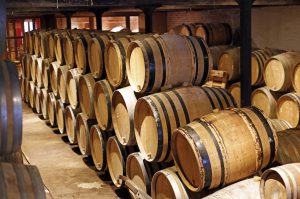 As we prepared to begin the Global tour of The World Sip, good fortune smiled upon us as current work commitments required us to be in Brussels for 2 days at pretty short notice. If you ask anyone about Belgium, they will tell you two words – waffles and beer – so naturally we seized the opportunity to film the pilot episode of the World Sip on the subject of Belgium beer.

As always we look for drinks that are products of their location, and look to explore how that impacts the liquid. From asking my contacts in the brewing industry, it was apparent very quickly that we simply had to visit Cantillon Brewery, and a few emails later we were given the green light to have a nose around.

A 1am bedtime followed by a 3am alarm before a 6am flight saw two very red eyed World Sip boys arrive in Brussels, our state worsened by the fact that Craig forgot the pre made peanut butter and marmite bagels, making it a very hungry morning. While I put my limited French to use at a trade show on the outskirts of town all day, Craig edited in the hotel before taking to the city for some reconnaissance and establishing shots. 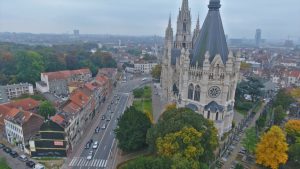 A night out to try some local brews ended in us experiencing the local delicacy, a fine dining establishment known as McDonalds, at 1am.

Feeling revitalised after a solid 5 hours sleep, the morning consisted of the packing, un packing, repacking and double checking of the gear – Cameras, gorilla pods, memory cards, batteries, chargers, drones, propeller blades and free mints from the lobby. The taxi driver played tune after tune after tune, meaning we arrived at Cantillon brewery feeling pumped up and ready for a big day.

The first thing that strikes you about the brewery is how unassuming it is. Nestled into the heart of Anderlecht, it has stood since 1900 and remained an independent family business since it was founded. Although very visitor friendly, make no mistake, this is a working brewery, producing an average of 2500 hectolitres of beer each year. Cantillon produce a type of beer know as Lambic, a traditional style of brewing which in modern times has been tarnished by big business large scale approach to production. Cantillon are known as the last remnant of a time when brewers and their product still had to contend with natures influence – and it was this unique process we were here to discover.

We eventually were met by Sophie the marketing manager (the language barrier led the original lady who greeted us to think we wanted a “selfie”), who facilitated us access to the brewery. She then introduced us to Alberto, a local beer expert who takes tours of the brewery and does beer tastings and food pairings. He then gave us an initial introduction to the brewery and pointed out areas of interest. Unfortunately due to the ad hoc nature of the visit we timed it when they were not actually brewing the beer, as the season didn’t start for another two weeks (the winter months allow for optimal temperature) so the master brewer wasn’t available for an interview. But we knew this in advance so we pressed on!

Catillon have been creating their beer in the same way for generations. The Wheat, Barley and Hops are crushed on the first floor, then dropped down to the Mashing Tun where they are mixed with hot water to convert the starch into fermentable sugars – the liquid produced at this stage is called wort. The wort is pumped into the hop boilers back on the first floor where they are heated to evaporate water and 3 year old aged hops is added before being pumped into the Cooling Tun. This is where the magic happens!

Lambic beer is specific in its nature as beer that has been fermented spontaneous by wild yeast and bacteria in the air. According to legend the types of microorganisms required to produce the one of a kind flavour that Cantillon achieve, are only found in the Senne River Valley in Brussels, which is where the brewery stands. In the Cooling Tun the wort is left to rest and the surface area is maximised to increase contact with the ambient air and the naturally occurring bacteria and yeast that is in it.

Once it is ready the wort is pumped into oak or chestnut casks that have been previously used for wine or occasionally cognac. After a few days the wild yeasts react with the sugars resulting in spontaneous fermentation in a violent reaction, meaning that for 3 or 4 days the barrels can’t be sealed for fear of explosion, as a result a whitish foam comes out the “bunghole” (this was the catalyst for a good hour’s worth of giggles). Barrels are then stored to be continually fermented for up to 3 years, after which it is bottled. The bottling machine fills around 1200 champagne style bottles an hour which are then plugged with a stopper made from natural cork.

Back at the bar Alberto kindly popped a few bottles for us to try. Like all liquids matured in wooden barrels Lambic doesn’t foam and taste quite different to the traditional beer taste we have come accustom to. It is more acidic, with an aftertaste making it very complex and distinct from all other beers. Their fruit beers again offered something completely different from the ales and lagers a British palate is used to. Regional fruits such as cherries, raspberries and grapes are added to the Lambic and soaked for at least 3 months. The fruit clearly contributes to the taste and flavour, however the beer still keeps its acidic character.

With a belly full of beer we said our goodbyes and made our way into Brussels to get more scenic shots and sample the other delights associated with the city – The Waffle! Craig’s covered in half white and half dark Belgium chocolate and mine with a base of bananas supporting a mountain of whipped cream and white chocolate drizzle were a much needed sugar hit!

Brussels Central square “Grand Place” provided the back drop for some time lapses and dialogue shots. However with the sun beginning to set and the departure lounge of the airport beckoning it looked like the drone we had carried around all day was going to be redundant. Time constraints coupled with a strict “no fly zone” enforced over the city due to its political importance and a city still feeling the effects of the recent terrorist attacks, meant that a drone flight was probably a ridiculous idea…. Luckily though, we specialise in the ridiculous!

Using the cover of a low wall in a square just a few hundred feet from Grand Place, a record speed set up of the drone had it shoot up to 90 meters and down again, in just a minute or so, whilst only drawing a modest crowd of 10-15 people. A hurried pack away, sprint across a busy road, through a subway station and out the other side to a waiting uber saw us safely away to the airport with no fines, arrests or gun shots fired. Pretty much as good as we could have hoped! In the departure lounge of the airport we finally managed to watch the footage back, and hopefully you will join us in agreeing the final shot was worth the risk. And if you work for the Brussels police, then obviously this is just a fictional story, we found the footage on a memory card at the airport that someone else obviously filmed but discarded…. Either way, it’s all part of the adventure!

So cheers to Brussels, Cantillon Brewery and the two Spanish girls that showed us where to go drinking that night. Bring on the next one.

More information on the brewery can be found at www.cantillon.be